Although Vietnam is one of the 15 countries in the world that have been positioning on global pharmaceutical map with valuable medicinal plants of high economic value, the country still has to import up to 75% of medicinal ingredients from abroad, not to mention a series of illegal importing cases of traditional medicines worth billions of VND discovered every year.

On average, each year, the country uses about 60 thousand tons of medicinal herbs of all kinds in the processing of traditional medicine flavors. However, Vietnam can only self-supply 25% of raw materials for domestic drug production, the remaining 75% still depends on imported sources.

The domestic data source does not meet the social needs and the large profits from the trading of medicinal products have resulted in a number of organizations and individuals using all kinds of tricks to smuggle and illegally transport the products. This is cross-border, making quality management difficult.

These smuggled pharmaceutical raw materials mainly originated from China, brought to Vietnam through the trails and openings in the northern border provinces.

For example, at the end of 2018, the smuggling line of 100 tons of goods transported on 7 trucks in Cao Lau commune, Cao Loc district, Lang Son province was arrested by the competent forces, mostly Chinese medicine. 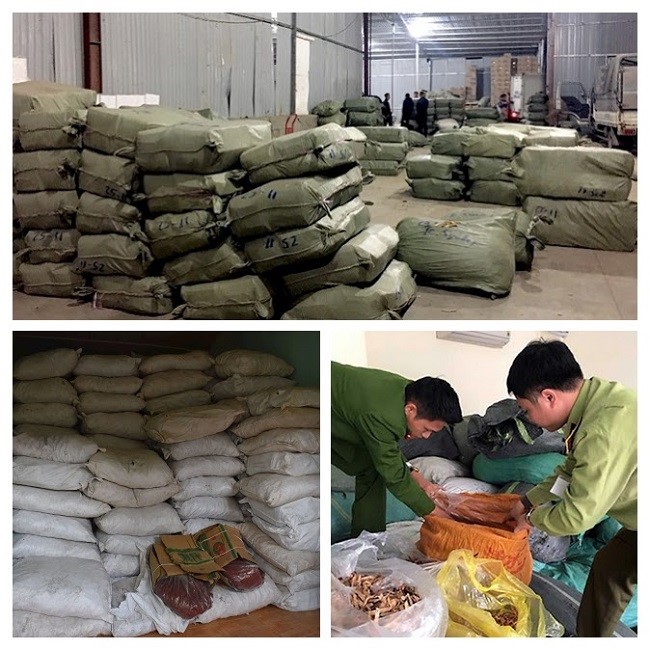 A series of cases of illegal import of pharmaceutical materials and traditional medicine in large quantity are detected each year.

In addition, on December 4, 2019, the Police Department of Investigation of Crime of Corruption, Economy and Smuggling (C03- Ministry of Public Security) has searched many warehouses in Hanoi, Bac Ninh and 5 trucks. in Lang Son, seized nearly 70 tons of Chinese medicine suspected of smuggling.

Most recently, on September 9, 2020, the Information Management Team No. 1 of the Tuyen Quang Department of Information and Communication has seized 13 tons of traditional medicine materials worth more than 2.7 billion VND including: Ky Tu, cross-frame, birth location, white and white, white and transparent rules. All of the above lines do not have invoices and vouchers as prescribed. Some of the goods are contained in packages with Chinese characters on them.

It is worth mentioning that, in many tests, the authorities also discovered that many imported medicinal herbs have been extracted to absorb all the content of the essence, just firewood.

Some traditional medicine manufacturers have even taken advantage of sulfur inhalation in excess of the prescribed level so that Chinese medicines will not be moldy, have a beautiful bright color, despite the dangers related to health. consumers.

According to the statistics of the Institute of Medicinal Materials, up to now, there have been 5,117 species of plants and fungi, 408 species of animals and 75 kinds of minerals that have medicinal uses in Vietnam.

In which, there are nearly 200 species with the potential to exploit and develop planting to meet domestic demand and towards export (such as cinnamon, anise, saffron, artichoke, amaranth, kim pre-herb, clover, cardamom…). Vietnam is one of 15 countries in the world that have medicinal map positioning with valuable medicinal plants of high economic value.

Paradoxically, we have a “gold store” of very high medical and economic value, but every year Vietnam has to import a large amount of medicinal herbs from abroad, mainly from China.

Assessing the potential to develop the pharmaceutical raw material market in Vietnam, Dr. Nguyen Tri Ngoc, Vice President and General Secretary of the Vietnam National Association of Agriculture and Rural Development said that Vietnam is a country with many favorable conditions for the development of medicinal plants.

“We have up to 5,000 kinds of plants, more than 400 valuable animals to extract and produce medicinal herbs. The amount is so rich and diverse, but we can only meet 25% of the raw materials for making medicinal medicines, which is still modest “, Mr. Ngoc emphasized. Currently, in a number of localities, it has developed models of growing medicinal herbs with high economic value such as Ngoc Linh ginseng, artichoke, cinnamon and anise …

Agreeing, Mr. Nguyen Dinh Tuan – Project Director of BioTrade Vietnam funded by the European Union assessed that: Vietnam has 35% of the land area for agricultural land purposes, 47% of the population works in In the agricultural sector, there are more than 10,000 species groups including flora and fauna of which more than 5,000 species can be used as natural pharmaceutical food ingredients.

“We are conducting a research on effective genetic management, biodiversity protection and policies to manage and encourage sustainable conservation and exploitation. In implementation of the BioTrade project, we found hundred types of natural materials existing not yet been commercialized, which can confirm the huge potential for developing raw materials supply in Vietnam, Mr. Tuan emphasized. Sharing about this issue, Mr. Vu Ba Phu – Director of Trade Promotion Department (Ministry of Industry and Trade) said that Vietnam’s agriculture and natural materials industry is in an impressive transition period. In the coming years, Vietnam will become the most important source of food ingredients and natural pharmaceuticals for the world market.

Therefore, the Trade Promotion Department has also organized many conferences and seminars in the past time in order to widely promote the export potentials and strengths of Vietnamese food ingredients, natural pharmaceuticals, and connecting Vietnamese manufacturing and exporting enterprises with potential overseas import, distribution, wholesale and retail business partners.

“Most recently, the Department of Trade Promotion also cooperated with Helvetas Vietnam and Vietnam Overseas Trade Offices to organize the” International Online Trade Conference on Vietnamese Food Ingredients and Natural Pharmaceutical 2020 “. This is one of the largest online trade conferences in the field of natural pharmaceutical and food ingredients , with simultaneous connection with many foreign markets ”, Mr. Phu emphasized.