According to the United Nations Environment Program (UNEP), a green economy is one that aims to improve human well-being and social equity, while minimizing environmental hazards and scarcity resources. In a green economy, economic growth, job opportunities, and poverty reduction are all driven by targeted objectives on the environment and society.

To put it simply, a green economy is both towards an economy in harmony with the environment, while creating “green businesses” for the economy, ie seeking profits in an environmentally friendly way.

In a recent report of the World Bank (WB) with the theme “Dynamic Vietnam: Creating a Foundation for a High-Income Economy” stated that Vietnam is in a emergency situation considering ít negative impacts to the environment.

The World Bank’s assessment is not surprising in a developing country, where hotspots of economic development are becoming the most polluted areas, where people can feel the negative effects from. 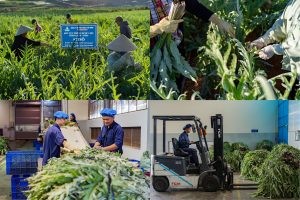 Over two decades of development, Vietnam is considered as a country that will become an important link in the global commodity supply chain, especially in food industry contributing to the world food security. Therefore, in addition to accelerating industrialization and modernization, in recent years, development in agriculture, forestry and fishery has also been paid special attention, reflected in the export results of the whole industry in 2019 reaching a value of about $ 41.3 billion. Vietnam ranks 15th in the world and has exported to more than 180 countries and territories.

To a more narrow and specific scope, within the framework of the project “Scaling up BioTrade Initiatives associated with biodiversity conservation in the herbal medicine sector in Vietnam” by the European Union (EU ) sponsor, accordingly through project interventions in 27 provinces and cities, the Project and partners have supported the pharmaceutical industry in Vietnam in managing genetic resources, effectively protecting biodiversity and adopting management policies, conservation and sustainable exploitation in accordance with BioTrade principles and standards.

The overall goal of the project is to help Vietnam become an internationally recognized country that supplies products from natural ingredients to the pharmaceutical, food and cosmetic industries – exploited and processing in accordance with Ethical BioTrade (EBT) voluntary standards.

Under this plan, Da Lat – Lam Dong was selected as the place to be managed and developed for artichoke and Diep Ha Chau. This is a very good opportunity for Da Lat – Lam Dong to standardize the planning of the raw material areas , ensuring the product’s quality to meet the European standards, turn artichoke, Diep Ha Chau into one of the strengths of Lam Dong in particular and Vietnam in general in green economic development.

Da Lat city and the surrounding area have long been known as a famous agricultural production area, besides staples such as vegetables and flowers, artichokes are one of the specific local crops.

Currently, Da Lat artichoke has grown over 100ha, is grown mainly in Da Lat and some communes of Lac Duong and Don Duong districts. In addition, the locality currently has nearly 30 pharmaceutical production and business enterprises, with very valuable artichoke tea and artichoke extract, this is a favorable condition, and also a mandatory requirement for the locality to build. and developing areas for growing artichoke materials with sufficient yield and quality.

According to experts, at present, in many regions of the country, planning a large enough material area for production is very difficult because of the old policy in land division, contract farming, … farmers hold. and agricultural production on their own land, they self-produce, self-destruct, find markets by themselves, so they are fragmented, unable to build the value of products and brands. This problem can only be solved when investors, businesses and cooperatives join the farmers. It is a combination model between 6 houses: House

This story, when asked about his concerns about building a sustainable raw material area, Mr. Nguyen Van Phuc in Ward 11, Da Lat city, Lam Dong province shared: With him, the planting of raw materials will benefit For both sides, instead of lowly output like before, signing an offtake contract with the company has brought peace of mind to farmers. Calculated that he has invested about 30 million VND / 1,000m2, selling price of leaves, stems and flowers for an average profit of 100 million / 1 ha. “Compared with flowers, the artichoke is not the same price, but it is more stable, their company buys leaves, and the flowers with their bodies sell them to traders”.

Enterprises have processing factories, have technology, but must have stable material areas. This requires the association of 6 houses. Currently, Lam Dong has an enterprise to build a 10-hectare artichoke material area, and the company invests in seeds, machinery, and technology transfer to farmers.

Mr. Nguyen Duc Binh, Chairman of the Farmers Association of Xuan Tho commune, Lam Dong shared: “Thanks to the support of the Biotrade project, the farmer has been interested in expanding the artichoke area. As a local government, it has also helped link farmers with scientists to open classes to improve farming skills ”.

Ms. Pham Thi Xuan Huong, General Director of Ladophar Company said: “We associate with farmers, because they are good at farming, and we have to help them apply science and technology, care process, harvest and must supervise them. If we talk about diversified products from artichokes, businesses in Lam Dong are not inferior to other countries in the world. But talking about a sustainable raw material area is still a concern of many businesses. Currently, Lam Dong province is expanding the artichoke material area towards Lac Duong district, where the climate and soil are similar to Da Lat to have a more abundant material area ”.

According to Dr. Vo Tri Thanh, former Deputy Director of the Central Institute for Economic Management (CIEM), said that in order to have production areas as planned, the State should have a mechanism to accumulate land and have a mechanism typically attracting businesses to invest in agricultural development.

There is a shortcoming with the artichoke growing area in Lam Dong is that each enterprise has 1 process, 1 output standard, so farmers also cultivate in very different directions. Therefore BioTrade project develops clean medicinal herbs funded by the European Union to help artichoke growers towards a common standard recognized by the international community that is good for both domestic and export markets. The project aims to encourage exploitation, along with biodiversity conservation, while at the same time developing sustainable medicinal value chains that are known and widely accepted in the European market.

Currently, many artichoke growing areas in Lam Dong, instead of growing in greenhouses as before, when participating in the project, artichokes of many farmers have switched to natural farming and using manure, without using drugs. Protect plants, increase nutrient content in soil, limit pathogens arising in the growth of artichokes. Mr. Dang The Quoc Tai, artichoke farmer in Lam Dong said: “Through the advanced technical training course of the BioTrade project, helping to absorb a number of new technologies, towards the artichoke standard of export gender ”.

The project has supported farmers in a closed chain from cultivation / cultivation, to production and consumption of products, as a bridge between farmers and businesses. Thousands of farmers feel secure in cultivating with GACP – WHO standards (good practice in cultivating and collecting medicinal plants). Farmers no longer have a narrow mindset that planting trees only for domestic consumption, but for standard raw materials in the most demanding markets.

Mr. Pham Van Luong, Director of Helvetas Vietnam – BioTrade EU Project Representative said: “Since 2014, when the Free Trade Agreement between Vietnam and the European Union has not been signed, we have Agricultural projects are financed by the European Union and the Swiss Government to access the European market. The project’s approach is to improve the capacity of farmers as well as businesses in certification as well as market access ”.

Lam Dong is assessed by the Government as a key area in the development of medicinal herbs. Artichoke is one of the medicinal priorities. European artichoke gardens are still being expanded in Da Lat. It is expected that Biotrade project will support farmers to build 50 medicinal value chains across Vietnam, creating medicinal products and products. high quality health protection, ready to conquer the European market when the EVFTA agreement really opens the door to this promised land./.