BioTrade Initiative was launched by the United Nations Conference on Trade and Development (UNCTAD) in 1996 to support the objectives of the Convention on Biological Diversity.

BioTrade refers to those activities of collection, production, transformation, and commercialization of goods and services derived from native biodiversity under the criteria of environmental, social and economic sustainability.

Returning to nature is an emerging trend in the world as well as in Vietnam. Vietnam has a large resource of about 4,000 natural ingredients which can be used as raw materials for the pharmaceutical, cosmetic and food industries. However, this supply has been dwindling and Vietnam has to import large volumes of raw materials from other countries such as China and India.

Sourcing with respect for biodiversity is a concern of not only governments but also the whole society.

In fact, shifting to sustainable sourcing of natural ingredients becomes inevitable for enterprises. In addition, enterprises’ brands and competitive advantages can only be strengthened if they communicate their brands integrating their commitments to biodiversity and environment protection.

Project “Scaling up of BioTrade initiatives within the phytopharmaceutical sector in Vietnam” was designed to help Vietnam solve the problems of national resources decrease, which puts in place an effective model of genetic resources and biodiversity management, in order to balance out the economic benefits and social demand with the conservation needs. 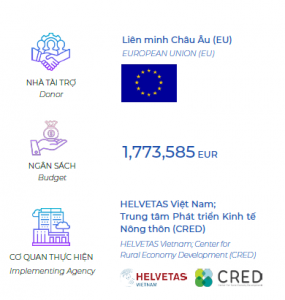